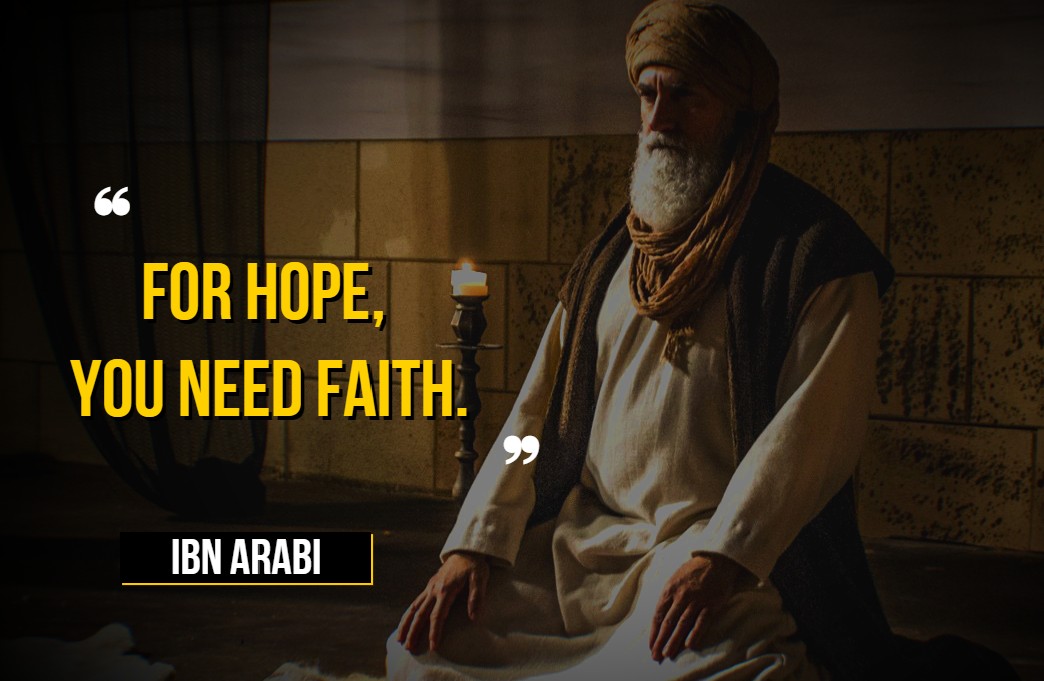 Ibn Arabi (ابن عربي‎‎) was an Arab Andalusian Muslim scholar, mystic, poet, and philosopher, whose works have grown to be very influential beyond the Muslim world. Out of the 850 works attributed to him, some 700 are authentic while over 400 are still extant. His cosmological teachings became the dominant worldview in many parts of the Islamic world.

He is renowned among practitioners of Sufism by the names al-Shaykh al-Akbar (“the Greatest Shaykh”; from here the Akbariyya or Akbarian school derives its name), Muḥyiddin ibn Arabi, and was considered a saint. He was also known as Shaikh-e-Akbar Mohi-ud-Din Ibn-e-Arabi throughout the Middle East.

Here are some Ibn Arabi spirtual, inspirational & wisdom quotes. May these Ibn Arabi Quotes inspire you to achieve in  Life. Do shre these Ibn arabi quotes with your friends and family.

For hope, you need faith.

“Wheresoever you turn, there is the face of Allah.”

The destiny of a person is determined by their efforts.

“When you know yourself, your ‘I’ness vanishes.”

“What you plant here, you will reap there.”

“If I am close to Him, He brings me even closer.”

“Be established in truth.”

“My heart has become capable of every form.”

Do not let the present be captured by the past.

“The things of the invisible world attract me more than those of actual life.”

If you trust in God and make him your companion, then all your paths will become easy and safe.

Every bird flies with their own kinds. Eagles with eagles. crows with crows.

You need to feel the pain so that you can understand the pain of others you have hurt.

There is no teacher greater

“Your personal nature seeks its paradise.”

“I believe in the religion of Love, whatever direction its caravans may take, for Love is my religion and my faith.”

“How can the heart travel to God, when it is chained by its desires?”

All that is left to us by tradition is mere words. It is up to us to find out what they mean.

“These stories I have recounted to you will remind you of what is within you.”

Mon Aug 10 , 2020
Shams tabrīzī or Shams al-Din Mohammad (1185–1248) was a Persian Muslim, who is credited as the spiritual instructor of Mewlānā Jalāl ad-Dīn Muhammad Balkhi, also known as Rumi and is referenced with great reverence in Rumi’s poetic collection, in particular Diwan-i Shams Tabrīzī (The Works of Shams of Tabriz). Tradition holds that […]