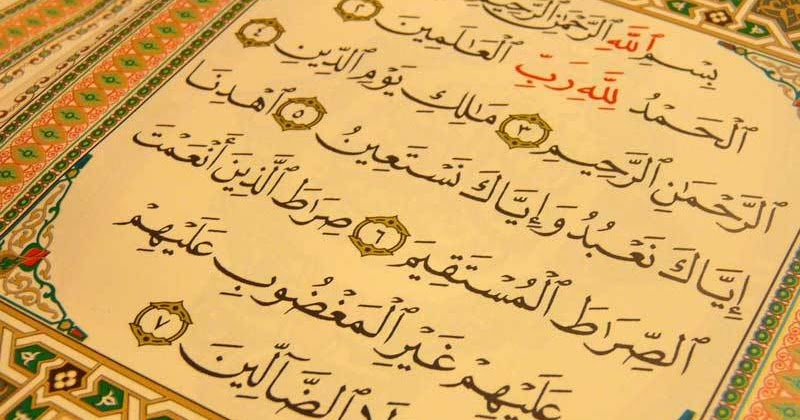 Surat Al-Fatiha is the first chapter of the Qur’an. It is a Makkan chapter; revealed in Makkah. Al-Fatiha is full of blessings. In this surah we praise to Allah, declare His glory and majesty, declare our sincerity to worship Him alone (You alone we worship and You alone we seek help from).
In the second half of the surah we pray for Allah for guidance and steadfastness upon the straight path of those who are guided not of those who had gone astray:

This Surah is called Al-Fatiha, that is, the Opener of the Book, the Surah with which prayers are begun. It is also called, Um Al-Kitab (the Mother of the Book), according to the majority of the scholars.
It is also called “as-sab` al-mathani” (the seven verses that are repeatedly recited). We recite this surah in all rak`ahs of every prayer. Allah says:

And indeed, We have bestowed upon you as-sab` al-mathani (the seven repeatedly recited verses), (i.e. Surat Al-Fatiha) and the Grand Qur’an. (Al-Hijr 15:87)

Abu Hurayrah said that the Messenger of Allah said, “(Al-Hamdu lillahi Rabbi Al-`alamin) is the Mother of the Qur’an, the Mother of the Book, and the seven repeated ayahs of the Qur’an.” (At-Tirmidhi)
It is also called Al-Hamd and As-Salah, because the Prophet said that his Lord said,
“The prayer (i.e. , Al-Fatiha) is divided into two halves between Me and My servants. When the servant says, `All praise is due to Allah, the Lord of existence,’ Allah says, ‘My servant has praised Me.’”
Al-Fatiha was called the Salah, because reciting it is a condition for the correctness of Salah – the prayer.
Al-Fatiha was also called Ash-Shifa’ (the Cure).
It is also called Ar-Ruqyah (remedy), since in the Hadith, there is the narration of Abu Sa`id telling the story of the Companion who used Al-Fatiha as a remedy for the tribal chief who was poisoned. Later, the Messenger of Allah said to a Companion, (How did you know that it is a Ruqyah)

As mentioned in the following hadith:
While Jibril (Gabriel) was with the Messenger of Allah, he heard a noise from above. Jibril lifted his sight to the sky and said, `This is a door in heaven being open, and it has never been opened before now.’ An angel descended from that door and came to the Prophet and said, `Receive the glad tidings of two lights that you have been given, which no other Prophet before you was given: the Opening of the Book and the last (three) Ayat of Surat Al-Baqarah. You will not read a letter of them, but will gain its benefit. [An Nasai]

It is a conversation with Allah

It is a shifa

Narrated Abu Sa`id Al-Khudri:
While we were on one of our journeys, we dismounted at a place where a slave girl came and said, “The chief of this tribe has been stung by a scorpion and our men are not present; is there anybody among you who can treat him (by reciting something)?” Then one of our men went along with her though we did not think that he knew any such treatment. But he treated the chief by reciting something, and the sick man recovered whereupon he gave him thirty sheep and gave us milk to drink (as a reward). When he returned, we asked our friend, “Did you know how to treat with the recitation of something?” He said, “No, but I treated him only with the recitation of the Mother of the Book (i.e., Al-Fatiha).” We said, “Do not say anything (about it) till we reach or ask the Prophet (ﷺ) so when we reached Medina, we mentioned that to the Prophet (ﷺ) (in order to know whether the sheep which we had taken were lawful to take or not). The Prophet (ﷺ) said, “How did he come to know that it (Al-Fatiha) could be used for treatment? Distribute your reward and assign for me one share thereof as well.” [Sahih Al Bukhari]

Being the Most Noble Part of Quran

“Should I not inform you of the most noble and excellent part of the Quran?” He then recited “All praise and thanks are due to Allah, the Lord of the Worlds” (An Nisai)

It means that Surah Al-Fatiha is the most outstanding section of Quran, which contains the best form of Islamic teachings in concise form.

Wed Jun 10 , 2020
Hijab Quotes | Hijab is an Arabic word meaning barrier or partition. Muslim women are required to observe the hijab in front of any man they could theoretically marry. Allah says in Quran (interpretation of the meaning): “O Prophet! Tell your wives and your daughters and the women of the […] 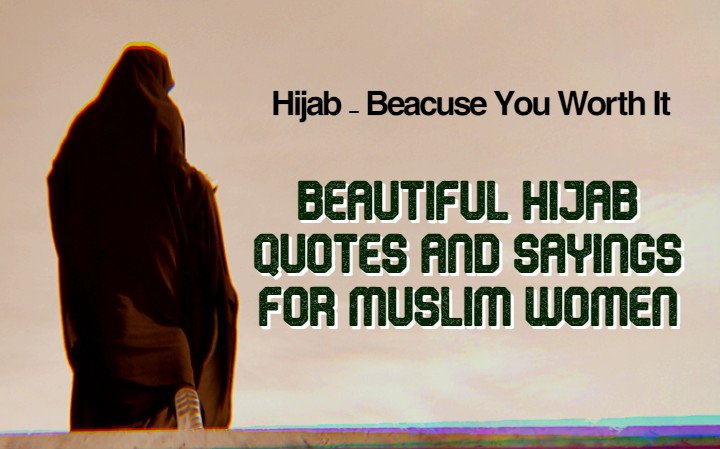