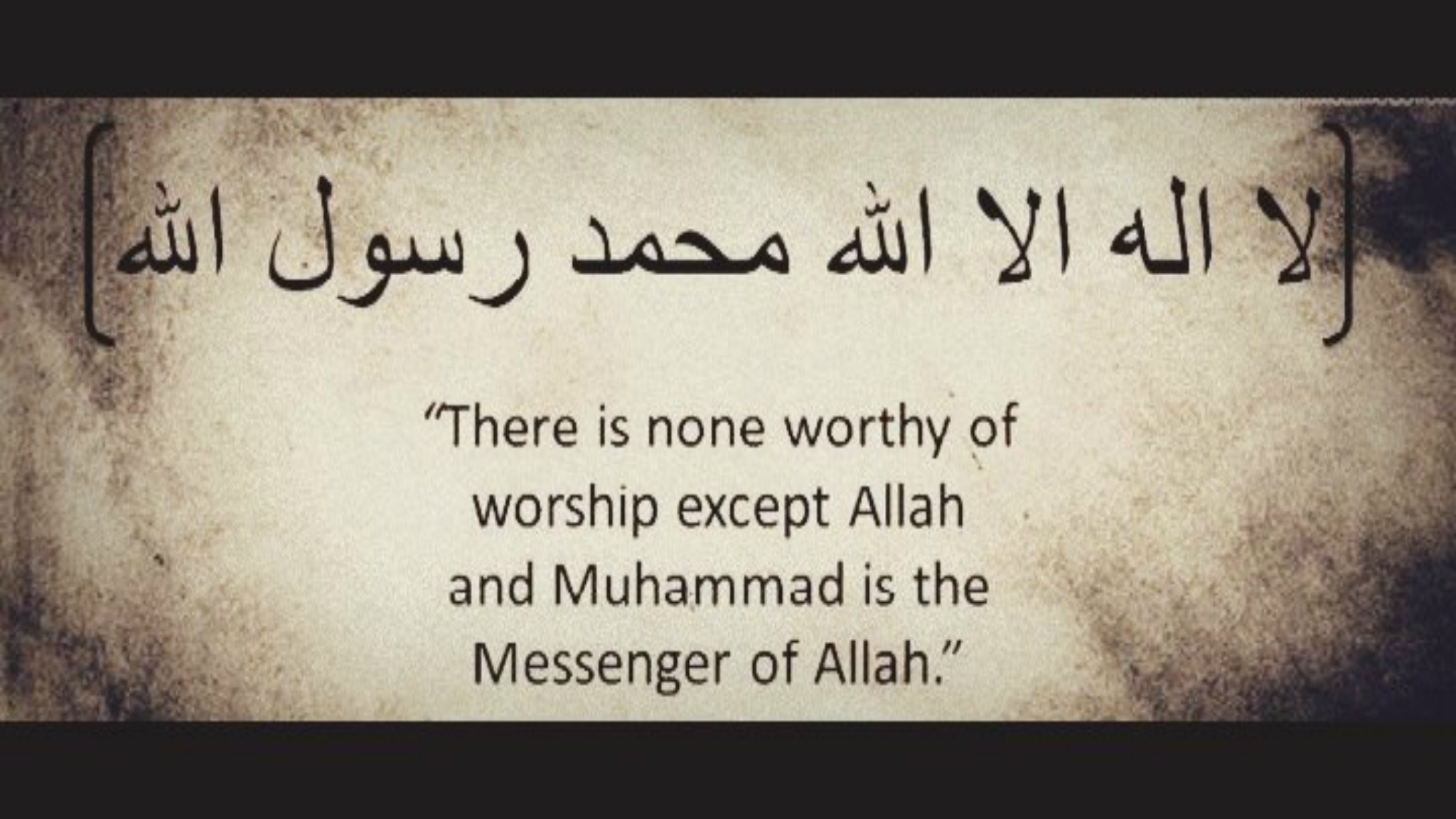 Why should we believe in the Kalimah, what benefits shall accrue tous by it? Let us try to find an answer to this important question.Whatever work we do is done with some purpose or some benefit in view. We neverdo anything without some objective, goal or need. Why do you drink water? Because itquenches your thirst. If you were to discover that drinking water failed to quench yourthirst, you would not waste your time doing it the next time you were thirsty. Why doyou eat food? Simply because you want to satisfy your hunger and keep your strengthto live. If it made no difference whether you ate food or not, you would naturally feel that it was a useless activity. Why do you take medicine when you are ill? Becauseyou want to get rid of your illness and regain your health. But you soon stop taking medicines which do not work. Why do you work so hard cultivating land? So thatcrops, fruits and vegetables may be produced. But if nothing grew after you had sown the seeds, you would not again exert yourselves to plough the field, to sow the seedand water the ground.

Thus, whatever work you undertake always has an end in view. If the end is achieved,you consider the work fruitful, and if not, you say it was pointless.

Success in the Hereafter

Bearing this in mind, let us now ask: Why should the Kalimah be recited? The obvious answer is : to draw a distinction between a Kafir and a Muslim. But what is the nature of this distinction? Does it mean that if a Kafir has two eyes, a Muslim will have four? Or that if a Kafir has one head, a Muslim will have two? You will say: No. It does not mean that; it means that there should be a difference between the end result of a Muslim’s life and a Kafir’s life. The end result of a Kafir’s life is failure: he will be deprived of God’s mercy in that-world, in the Hereafter, and be totally wretched; while that of a Muslim’s is success: he will win the pleasure of God and be happy and honoured there.

Your answer is correct. But now tell me: What is the nature of that-world? And, what is the meaning of being a failure in the Heareafter? What does it mean to be successful and honoured there?

We need not delay ourselves working out the answer to the first question, for it has already been given by the Prophet, blessings and peace be on him: ‘This-world is the cultivating ground of the Hereafter’.

This-world and the Hereafter are not two separate entities, but a continuous process. This process begins in this-world and ends in the Hereafter. The relationship between the two is the same as that between cultivation and crop. You plough the land, sow the seeds, irrigate and tend field till such time as the crop is ready. When you have reaped the harvest, you feed yourselves it throughout the year.

You will naturally reap whatever you have sown in the land. If nothing is sown, nothing will grow. Whatever mistakes and errors you make in the course of ploughing, sowing irrigating and tending your fields, the effect will become apparent at the time of reaping the crop. But if you have carried out all the necessary preparations properly, you will get your reward at the time of reaping.

This is exactly the position in respect of this-world and that-world. This-world is like ground to be tilled. Man has been sent into this field for the purpose of raising a crop for himself by his own efforts and hard work. He has been allotted specific time—from birth till death—to do this task. Whatever type of crop he sows will be reaped in his life beyond the grave, and that produce will be the mainstay of his life in the Hereafter.

If you have sown good seed in the field of this-world throughout your lives and have nourished it with water and careful supervision, you will find the fruits of your labours ready in the next life in the shape of beautiful gardens. You will be able to live happily on the fruits of the garden you have cultivated so assiduously throughout your earthly lives; you will not need to do any further hard work. This is Paradise, this is the success, the state of gratification in the Hereafter.

In contrast to this, if you sow thorns and grow bitter and poisonous plants during your lives on earth, you will reap a similar crop in the next life. You will not be given a second chance to grow a good crop and will have no choice but to sustain yourselves on the bad crop. You will have to lie on the bed of thorns which you have nurtured, and eat

The bitter, poisonous fruits you have grown. This is what is meant by being wretched and unsuccessful in the Hereafter.

The same meaning of the Hereafter as I have described is given in the Qur’an and the Hadith. This shows that the success or failure of a man in the life after death depends on whether his knowledge and actions have been correct during his life on earth.

True Purpose of the Kalimah

You said earlier that the purpose of reciting the Kalimah was to differentiate between the end results of a Kafir and a Muslim. Now, having discussed further the nature of the end result and of the Hereafter, we will have to rephrase your answer. Now you will have to say that the purpose of reciting the Kalimah is to set right man’s knowledge and actions here in this-world so that ultimately he attains happiness in that-world. This Kalimah teaches us to plant that garden whose fruits we will pick in the Hereafter. If we do not believe in the Kalimah how can we plant the garden and from where will we pick its fruits in the Hereafter? And if we merely utter the words of the Kalimah without it correcting our knowledge and if our actions too remain the same as if we had not uttered it.

Would you, then, not agree that it is pointless to utter the Kalimah without letting it change our thoughts and deeds? There is no reason why our fates in this case should be different from those of Kafirs. We do not put God under any obligation by merely uttering the Kalimah. If we do not learn how to plant a garden, and instead sow thorns all our lives, we cannot expect to inherit a flourishing garden with fruits in the next world. Several examples are before you to show that it is meaningless to do something if an identical outcome would result if you had done nothing. Medicine is not medicine if a patient’s condition remains the same after using it. In the same way, if a Kalimah reciter’s knowledge and actions remain the same as those of a non-
reciter, such a recital is meaningless. If no difference exists between the lives of Kafirs and Muslims on earth, how can there be any difference between their lives in the Hereafter?

What Does the Kalimah Teach Us?

What, then, is the nature of the knowledge which the Kalimah Tayyibah imparts to us? And what difference takes place between the actions of a Muslim and a Kafir after acquiring this knowledge?

One: Submission to Allah. The first thing that you learn from this Kalimah is that you
are slaves of Allah, and of Allah alone. Fully understand this profound truth, and you will be automatically led to the realization that, in this world, you must live according to the will be tantamount to rebellion against your Master.

Two: Obedience to the Prophet. The second thing that you learn from the Kalimah is that Muhammad, blessings and peace be on him, is the Messenger of Allah. Having learnt this, it immediately becomes self-evident that, to grow flowers and fruits in this world instead of thorns and poisonous plants, you have to plant your gardens as he has taught you. If you follow his way, you will reap a fine harvest in the Hereafter; but if you act against his way, you will grow thorns in this world and reap only thorns in the Hereafter.

Actions Must Accord With Knowledge

When you have acquired this knowledge it is essential that your actions should be in conformity with it. If you believe that you have to die one day, that after death there is another life, and that in that life you will have to sustain yourselves solely on that crop which you produced in this world before leaving it, then it is scarcely possible for you to deviate from the path shown by the Prophet, blessings and peace be on him. Why do you cultivate your fields in this world? Simply because no crops will grow unless you do and that without a crop you will die of starvation. If you have not been certain of this, if you had thought that a crop could grow without cultivation, or that you could satisfy your hunger without crops, you would never have laboured to cultivate the fields. In other words, your actions accorded with your knowledge.

Judge your position with respect to the Kalimah in like manner. You assert that you accept God as your Master and the Muhammad, blessings and peace be on him, as Gods’s Messenger. You also affirm belief in life after death. Why should, then, your actions run counter to Quranic teachings and the Prophet’s Sunnah? Such undoubtedly is the result of weak faith. If you really have faith that your fate in the Hereafterdepends on your behaviour in this life, you would never risk being negligent in living as God wills you to live. Only someone who does not really believe that what he is sowing will produce thorns and that these thorns will cause him harm would do such a thing. You never pick up embers in your hand knowingly because you know that they will burn you. Only children put their hands in the fire because they do not know what will happen.

You become Muslims by reciting a few words called the Kalimah:

There is no god but Allah; Muhammad is the Messenger of Allah.

Sun Jan 12 , 2020
What is Kufr and Islam? You must, first of all, recollect one important thing: What is Kufr and what is Islam? Kufr means refusal to obey God, and Islam means total submission to God alone and refusal to accept any ideas, laws or commandments, which contravene the guidance, received from […]