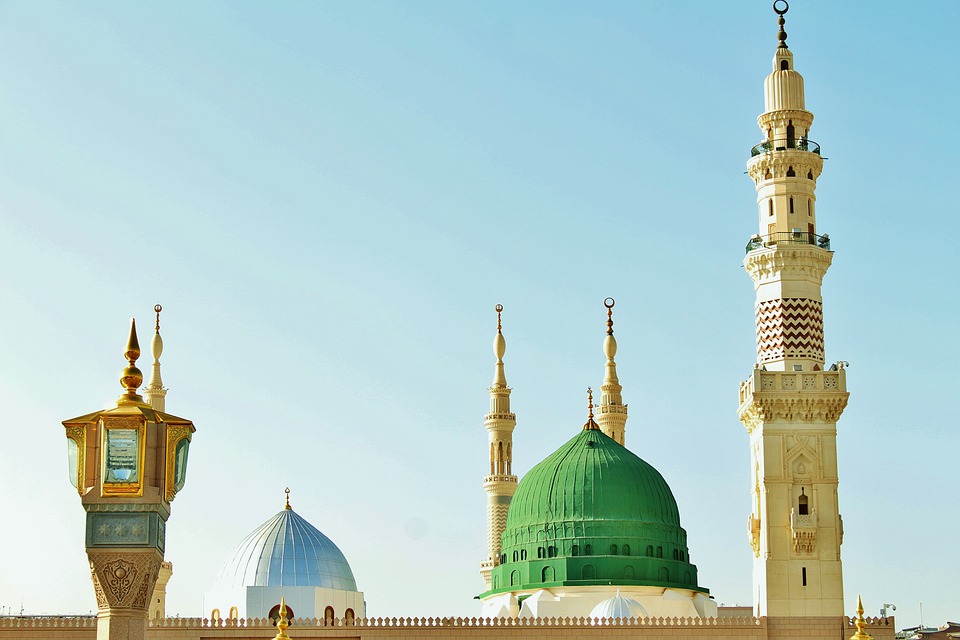 Muhammad (PBUH) The Prophet of Islam – His Biography [Part 2]

He was forty years old, and it was the fifth consecutive year since his annual retreats, when one night towards the end of the month of Ramadan, an angel came to visit him, and announced that God had chosen him as His messenger to all mankind. The angel taught him the mode of ablutions, the way of worshipping God and the conduct of prayer. He communicated to him the following Divine message:

With the name of God, the Most Merciful, the All-Merciful. Read: with the name of thy Lord Who created, Created man from what clings, Read: and thy Lord is the Most Bounteous, Who taught by the pen, Taught man what he knew not. [Qur’an 96:1-5] 18.

Deeply affected, he returned home and related to his wife what had happened, expressing his fears that it might have been something diabolic or the action of evil spirits. She consoled him, saying that he had always been a man of charity and generosity, helping the poor, the orphans, the widows and the needy, and assured him that God would protect him against all evil.

Then came a pause in revelation, extending over three years. The Prophet must have felt a shock at first, then a calm, an ardent desire, and after a period of waiting, a growing impatience or nostalgia. The news of the first vision had spread and at the pause, the sceptics in the city had begun to mock at him and cut bitter jokes. They went so far as to say that God had forsaken him.

During the three years of waiting, the Prophet had given himself up more and more to prayers and to spiritual practices. The revelations were then resumed and God assured him that He had not at all forsaken him. On the contrary, it was He Who had guided him to the right path, therefore he should take care of the orphans and the destitute, and proclaim the bounty of God on him (cf. Q. 93:3-11). This was in reality an order to preach. Another revelation directed him to warn people against evil practices, to exhort them to worship none but the One God, and to abandon everything that would displease God (Q. 74:2-7). Yet another revelation commanded him to warn his own near relatives (Q. 26:214), and “Proclaim openly that which thou art commanded, and withdraw from the Associators (idolaters). Lo! We defend thee from the scoffers” [Qur’an 15:94-5]. According to Ibn Ishaq, the first revelation (n. 17) had come to the Prophet during his sleep, evidently to reduce the shock. Later revelations came in full wakefulness.

The Prophet began by preaching his mission secretly at first among his intimate friends, then among the members of his own tribe and thereafter publicly in the city and suburbs. He insisted on the belief in One Transcendent God, in Resurrection and the Last Judgement. He invited men to charity and beneficence. He took necessary steps to preserve through writing the revelations he was receiving, and ordered his adherents also to learn them by heart. This continued all through his life, since the Qur’an was not revealed all at once, but in fragments as occasions arose.

The number of his adherents increased gradually, but with the denunciation of paganism, the opposition also grew more intense for those who were firmly attached to their ancestral beliefs. This opposition degenerated in the course of time into physical torture of the Prophet and of those who had embraced his religion. These were stretched on burning sands, cauterized with red hot iron and imprisoned with chains on their feet. Some of them died of the effects of torture, but none would renounce his religion. In despair, the Prophet Muhammad (PBUH) advised his companions to quit their native town and take refuge abroad, in Abyssinia, “where governs a just ruler, in whose realm nobody is oppressed” (Ibn Hisham). Dozens of Muslims profited by his advice, though not all. These secret flights led to further persecution of those who remained behind.

The Prophet Muhammad (PBUH) called this religion “Islam,” i.e. submission to the will of God. Its distinctive features are two:

(1) A harmonius equilibrium between the temporal and the spiritual (the body and the soul), permitting a full enjoyment of all the good that God has created, (Qur’an 7:32), enjoining at the same time on everybody duties towards God, such as worship, fasting, charity, etc. Islam was to be the religion of the masses and not merely of the elect.

(2) A universality of the call – all the believers becoming brothers and equals without any distinction of class or race or tongue. The only superiority which it recognizes is a personal one, based on the greater fear of God and greater piety (Qur’an 49:13).

When a large number of the Meccan Muslims migrated to Abyssinia, the leaders of paganism sent an ultimatum to the tribe of the Prophet demanding that he should be excommunicated and outlawed and delivered to the pagans to be put to death. Every member of the tribe, Muslim and non-Muslim, rejected the demand. (cf. Ibn Hisham). Thereupon the city decided on a complete boycott of the tribe: Nobody was to talk to them or have commercial or matrimonial relations with them. The group of Arab tribes called Ahabish, inhabiting the suburbs, who were allies of the Meccans, also joined in the boycott, causing stark misery among the innocent victims consisting of children, men and women, the old and the sick and the feeble. Some of them succumbed yet nobody would hand over the Prophet to his persecutors. However, an uncle of the Prophet, Abu Lahab, left his tribesmen and participated in the boycott along with the pagans. After three dire years, during which the victims were obliged to devour even crushed hides, four or five non-Muslims, more humane than the rest and belonging to different clans publicly proclaimed their denunciation of the unjust boycott. At the same time, the document promulgating the pact of boycott which had been hung in the temple, was found, as Muhammad (PBUH) had predicted, eaten by white ants, that spared nothing but the words God and Muhammad (PBUH). The boycott was lifted, and owing to the privations that were undergone, the wife and Abu Talib, the chief of the tribe and uncle of the Prophet died soon after. Another uncle of the Prophet, Abu-Lahab, who was an inveterate enemy of Islam, now succeeded to the headship of the tribe. (cf. lbn Hisham, Sirah).

It was at this time that the Prophet Muhammad (PBUH) was granted the mi’raj (ascension): He saw in a vision that he was received in heaven by God, and was a witness to the marvels of the celestial regions. Upon his return, he brought for his community, as a Divine gift, Islamic worship, which constitutes a sort of communion between man and God. It may be recalled that in the last part of Muslim service of worship, the faithful employ as a symbol of their being in the very presence of God, not concrete objects as others do at the time of communion, but the very words of greeting exchanged between the Prophet Muhammad (PBUH) and God on the occasion of the former’s mi’raj: “The blessed and pure greetings for God! – Peace be with thee, O Prophet, as well as the mercy and blessing of God! – Peace be with us and with all the well- behaving servants of God!” The Christian term “communion” implies participation in the Divinity. Finding it pretentious, Muslims use the term “ascension” towards God and reception in His presence, God remaining God, and man remaining man, and no confusion between the two.

The news of this celestial meeting led to an increase in the hostility of the pagans of Mecca.

[From the book – ‘Introduction to Islam’ by ‘Dr Muhammad Hamidullah]

Next: The Prophet of Islam – His Biography (Part 1)

Muhammad (PBUH) The Prophet of Islam – His Biography [Part 3]

Thu Jan 16 , 2020
Introduction to Islam Muhammad (PBUH) The Prophet of Islam – His Biography [Part 2] Migration to Madinah  The annual pilgrimage of the Ka’bah brought people from all parts of Arabia to Mecca. The Prophet Muhammad (PBUH) tried to persuade one tribe after another to afford him shelter and allow him […] 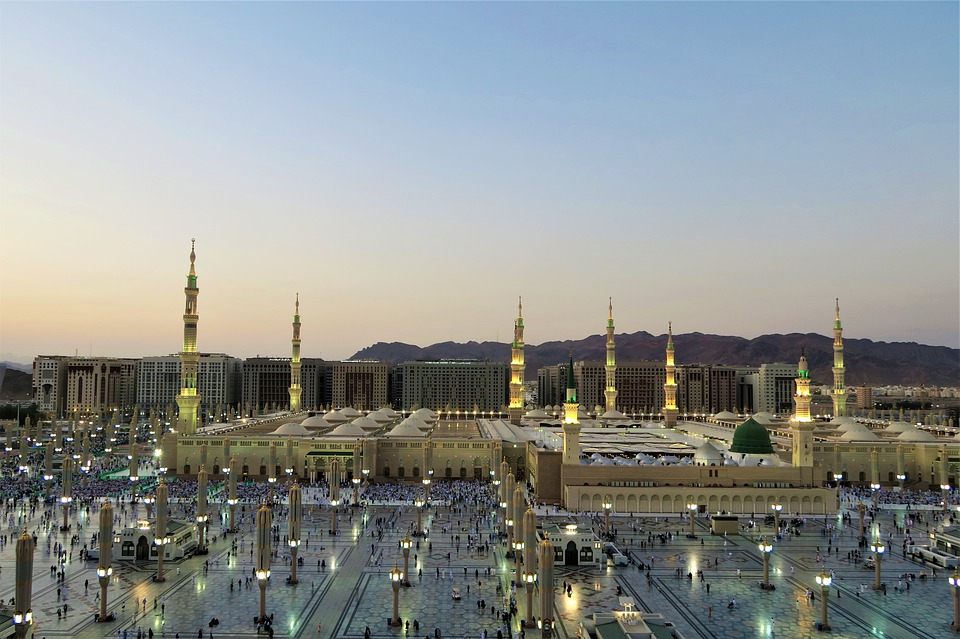