Hajj Mubarak Quotes, Wishes 2022 | Hajj was made obligatory in 9AH, the year of the Delegations (al-Wufood), in which Chapter Aal ‘Imran was revealed, in which Allah Says (what means): {“And Hajj (pilgrimage to Makkah) to the House (Ka’bah) is a duty that mankind owes to Allah, those who can afford the expenses (for one’s conveyance, provision and residence).”} [Qur’aan, 3:97]

Hajj is a Fareedah (obligatory duty), one of the pillars of Islam. The evidence (Daleel) for this is the Ayah mentioned above, and there is also evidence in the Sunnah which indicates the same thing.

Ibn ‘Umar, may Allah be pleased with them both, said: “The Messenger of Allah, sallallaahu ‘alayhi wa sallam, said: “Islam is built upon five (pillars): testifying that there is no god worthy of worship but Allah and that Muhammad is the Messenger of Allah, establishing regular prayer, paying Zakaah, Hajj and fasting Ramadhaan.” (Reported by Al-Bukhaari, 8; Muslim, 16).

We ask Allah to bless those who perform Hajj with forgiveness of sins, and for those who have not done Hajj we ask Him to give them opportunity.

Here is a collection of Hajj Mubarak Quotes, Wishes Messages: 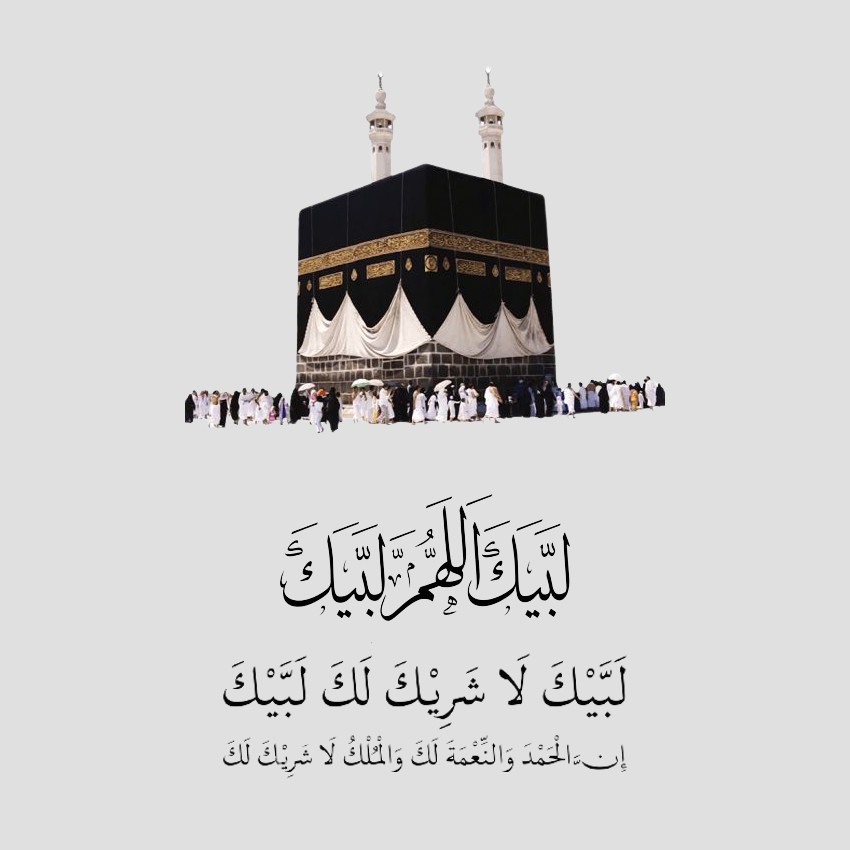 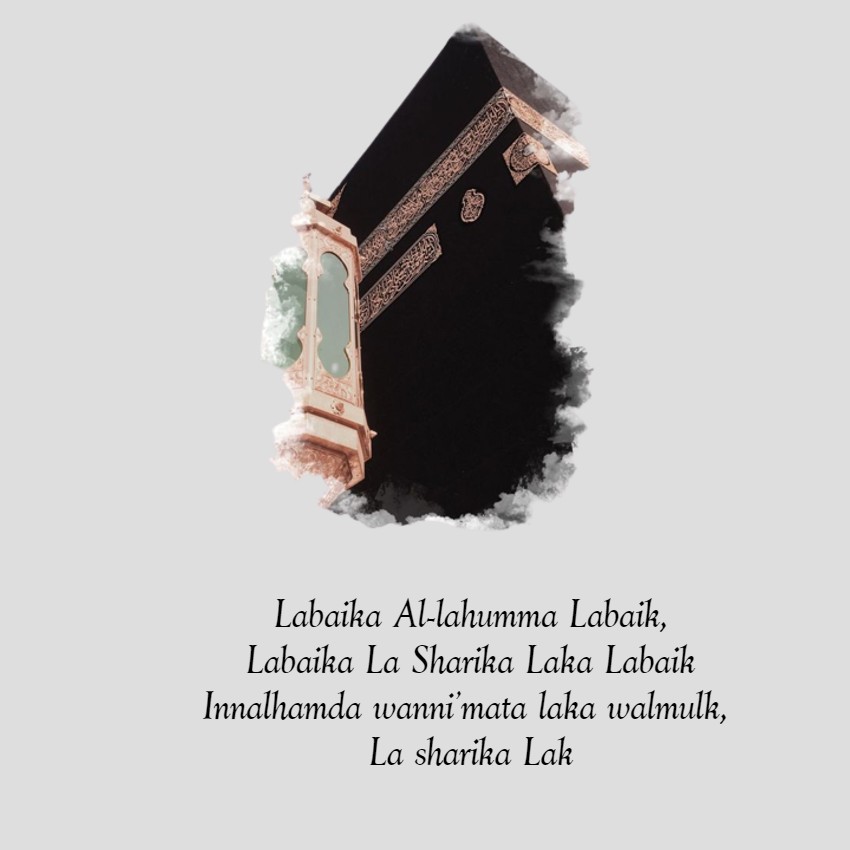 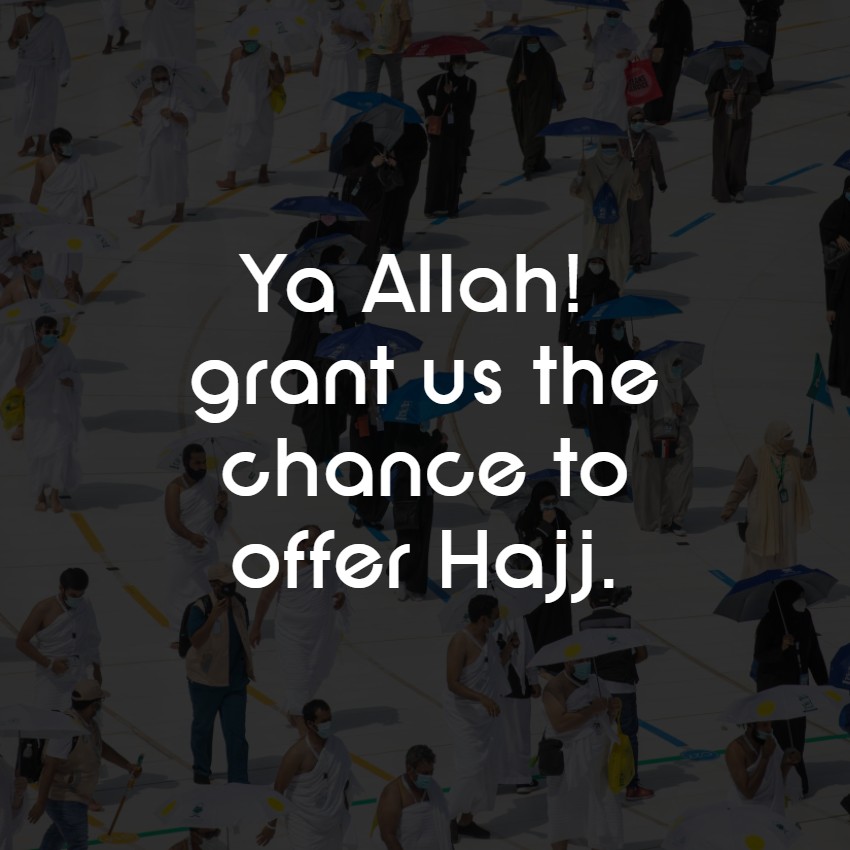 Ya Allah, grant us the chance to offer Hajj. 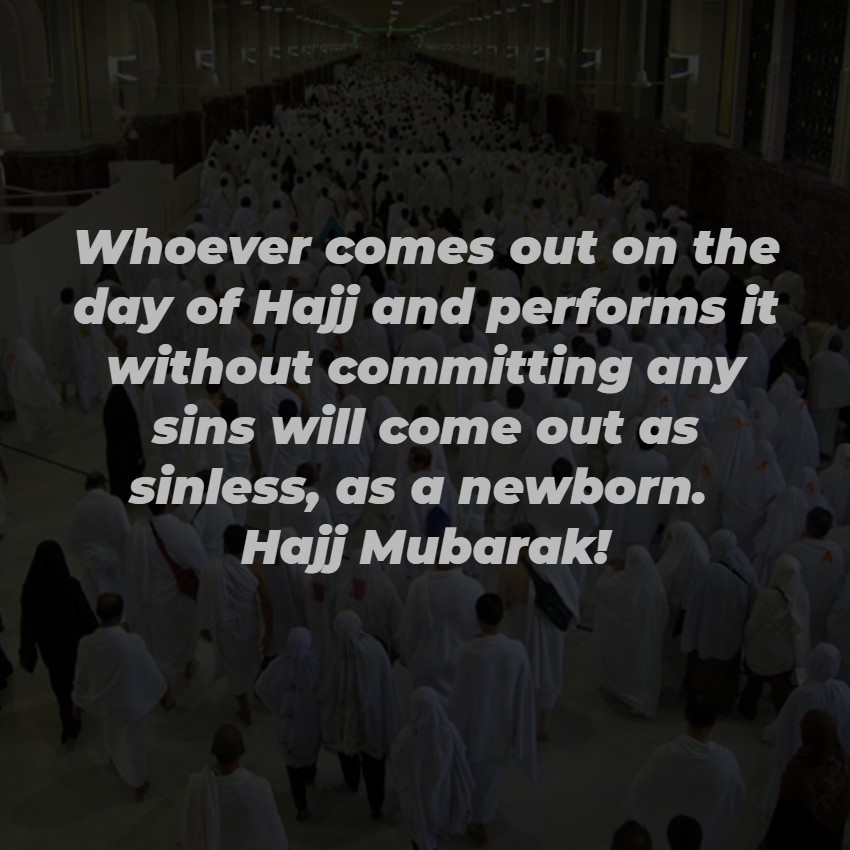 Whoever comes out on the day of Hajj and performs it without committing any sins will come out as sinless, as a newborn. 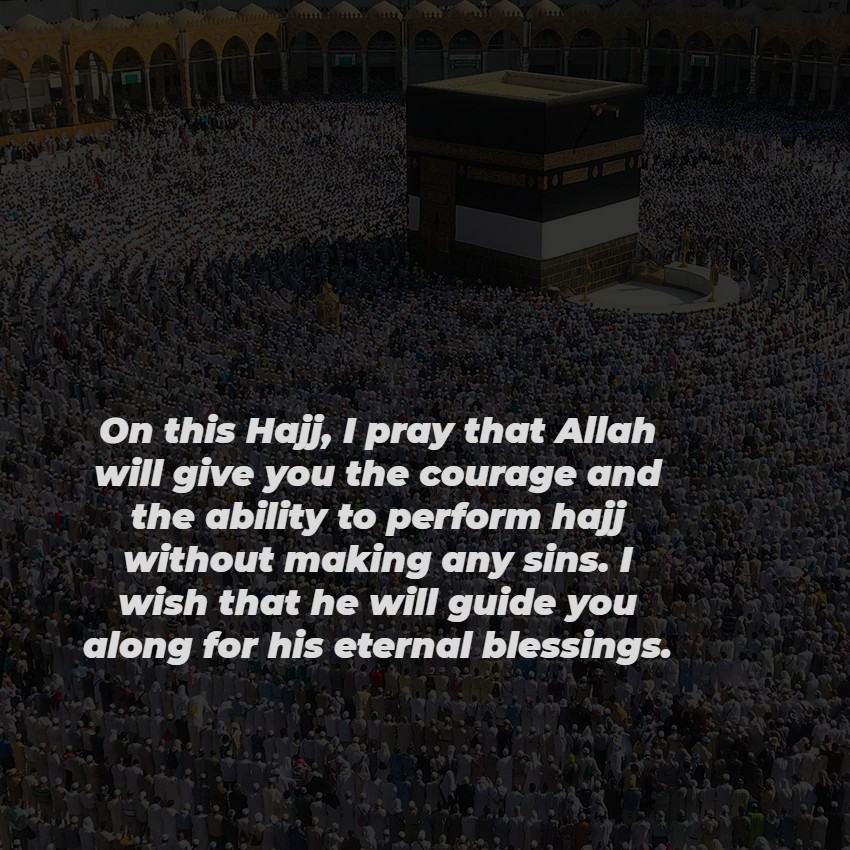 On this Hajj, I pray that Allah will give you the courage and the ability to perform hajj without making any sins. I wish that he will guide you along for his eternal blessings. 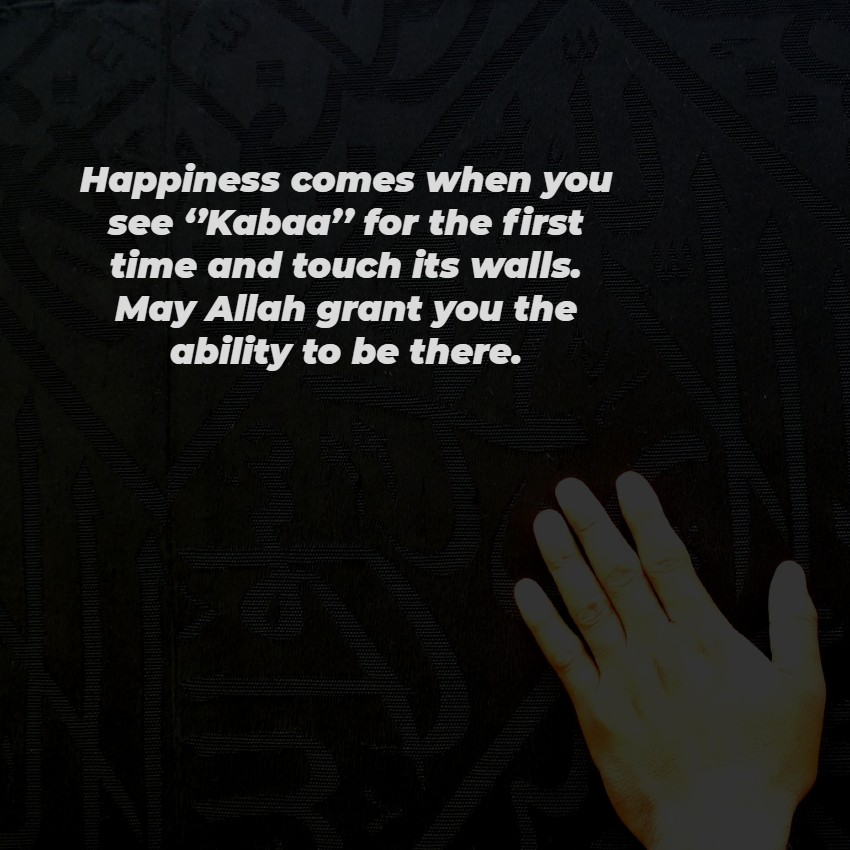 Happiness comes when you see ‘’Kabaa’’ for the first time and touch its walls. May Allah grant you the ability to be there. 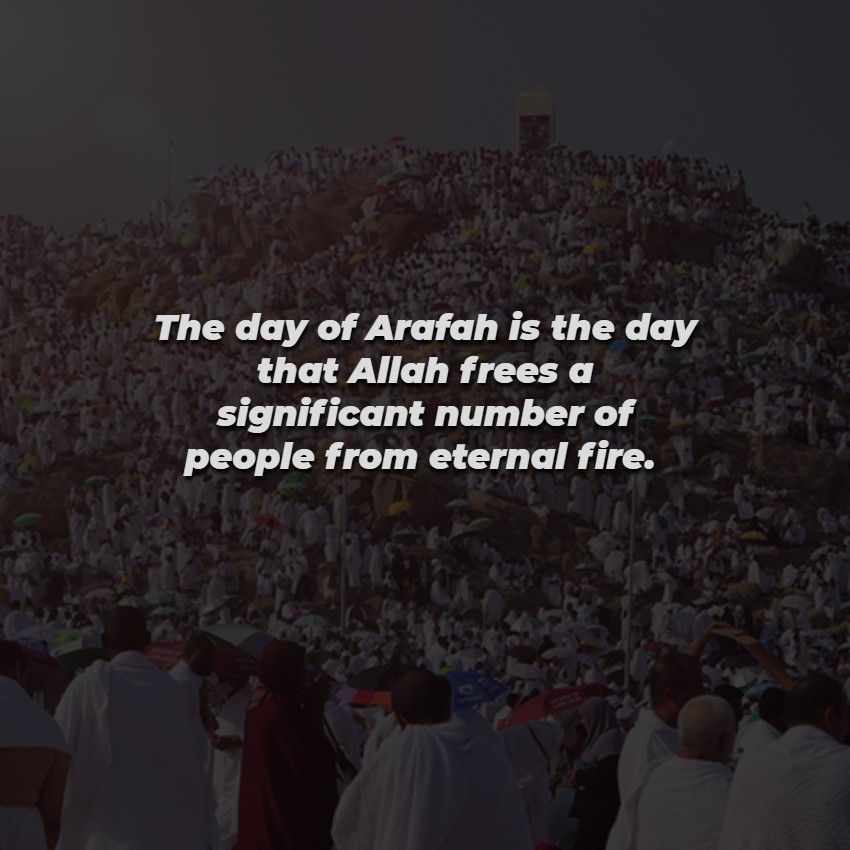 The day of Arafah is the day that Allah frees a significant number of people from eternal fire. 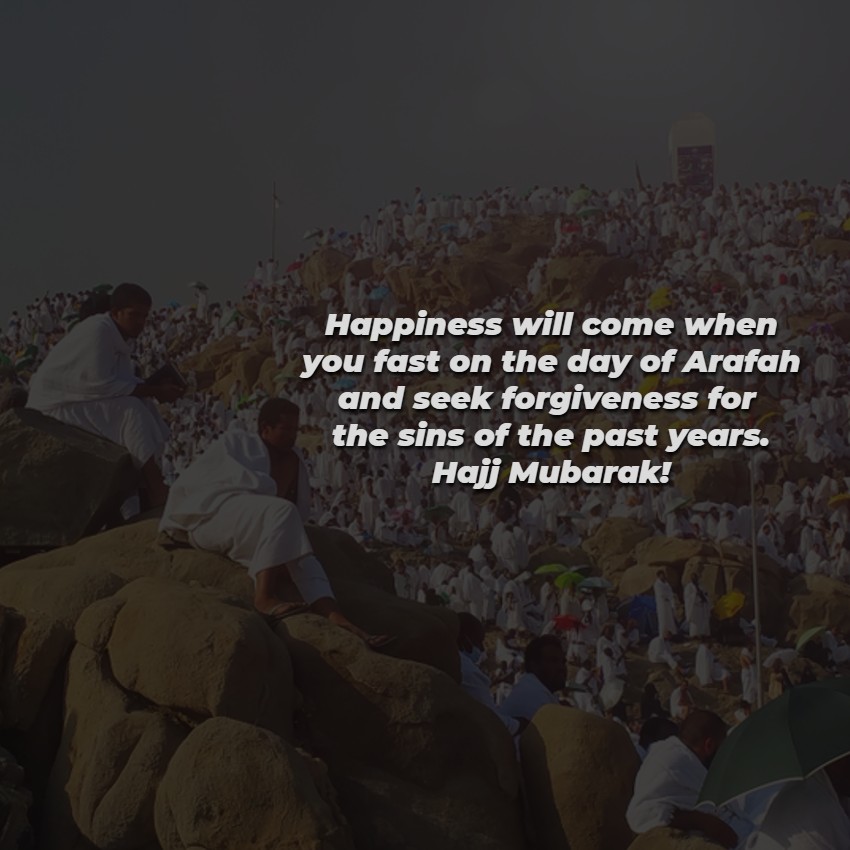 Happiness will come when you fast on the day of Arafah and seek forgiveness for the sins of the past years. Hajj Mubarak!

– “Hajj demonstrate us unity and equality. During time of hajj everyone wears the same white cloths. Whether one is black or white, rich or poor, Arab or non-Arab – we are all equal in front of Allah.” 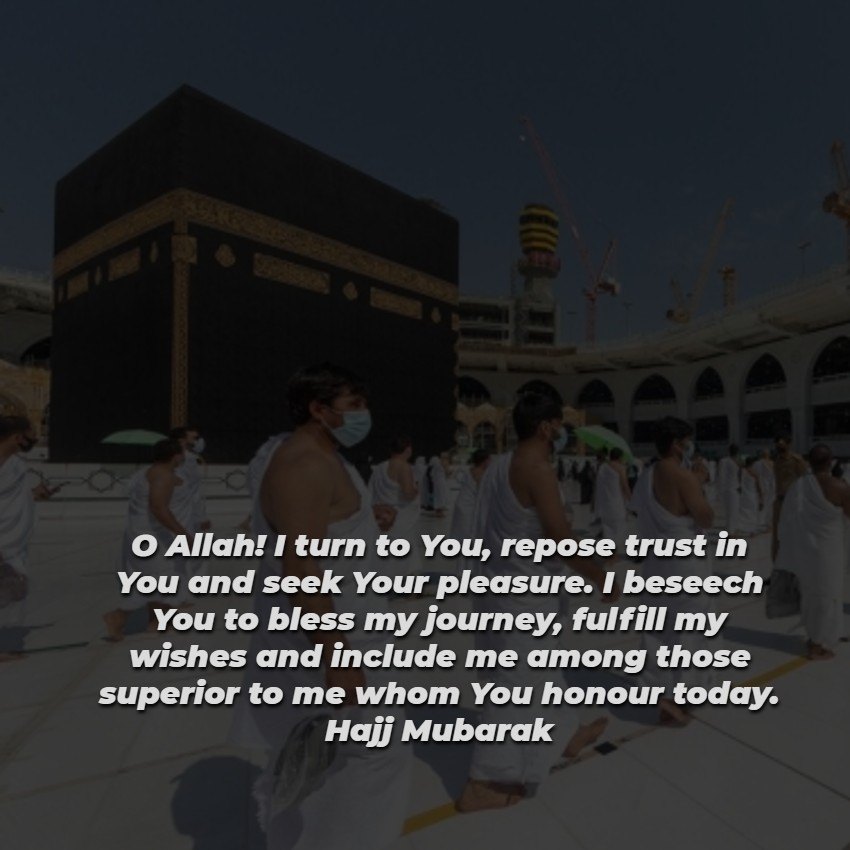 O Allah! I turn to You, repose trust in You and seek Your pleasure. I beseech You to bless my journey, fulfill my wishes and include me among those superior to me whom You honour today. Hajj Mubarak. 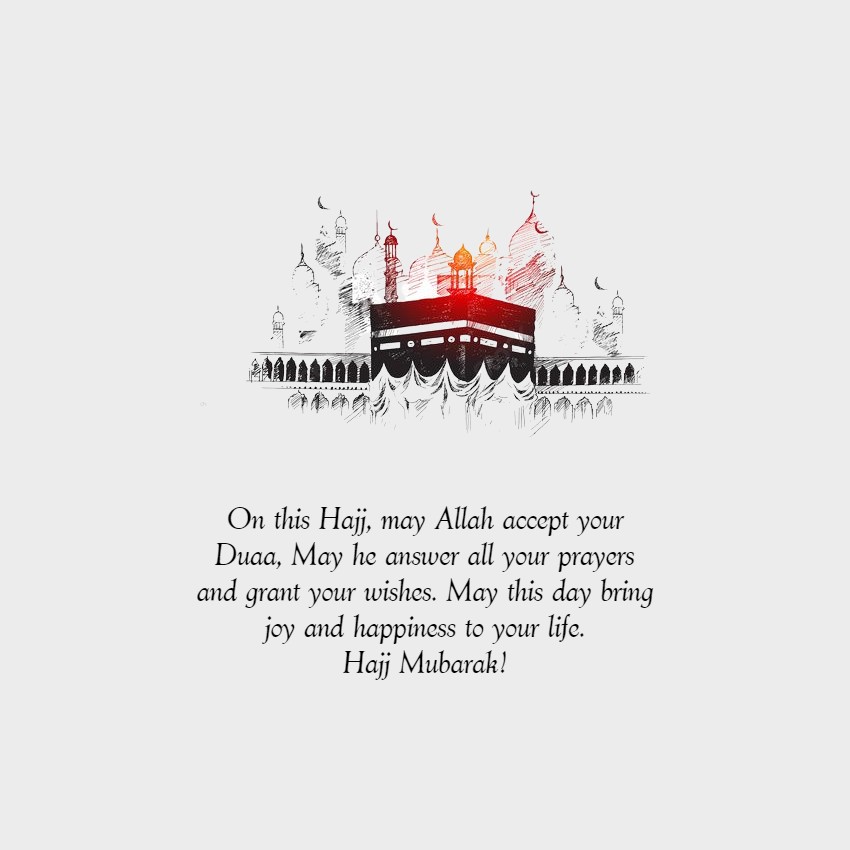 On this Hajj, may Allah accept your Duaa, May he answer all your prayers and grant your wishes. May this day bring joy and happiness to your life. Hajj Mubarak! 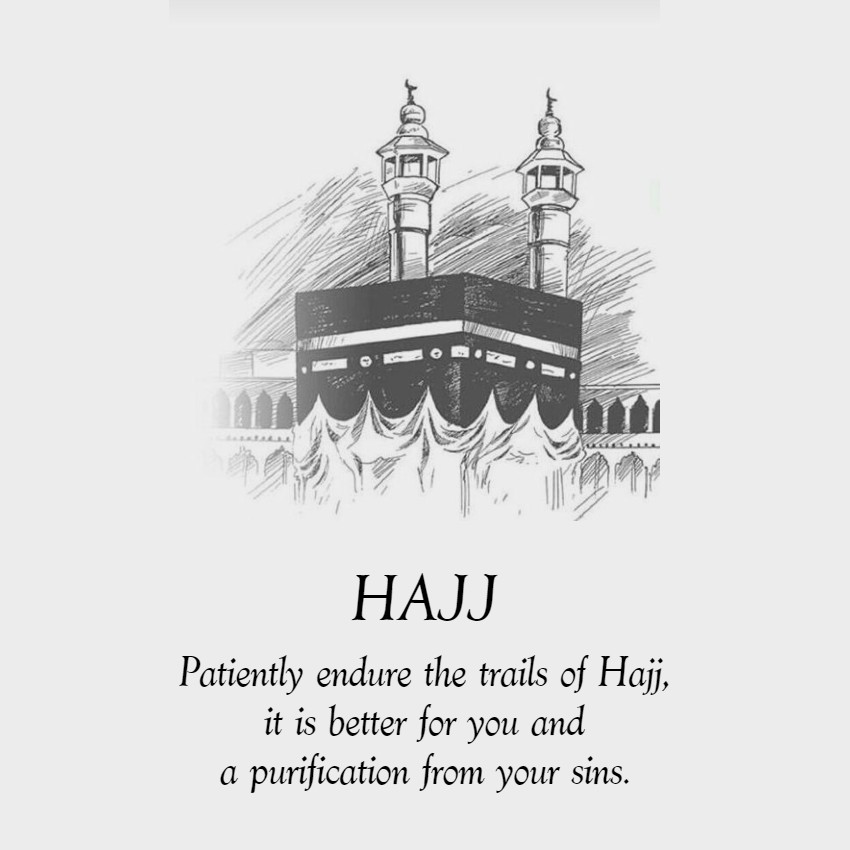 Patiently endure the trails of Hajj, it is better for you and a purification from your sins. 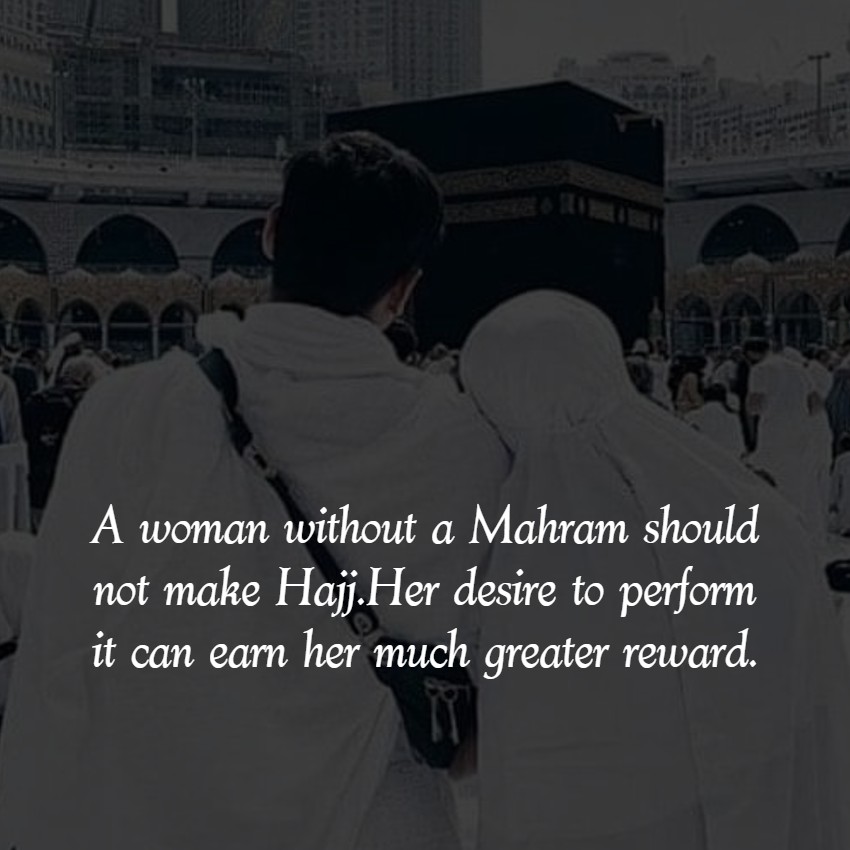 A woman without a Mahram should not make Hajj. Her desire to perform it can earn her much greater reward. 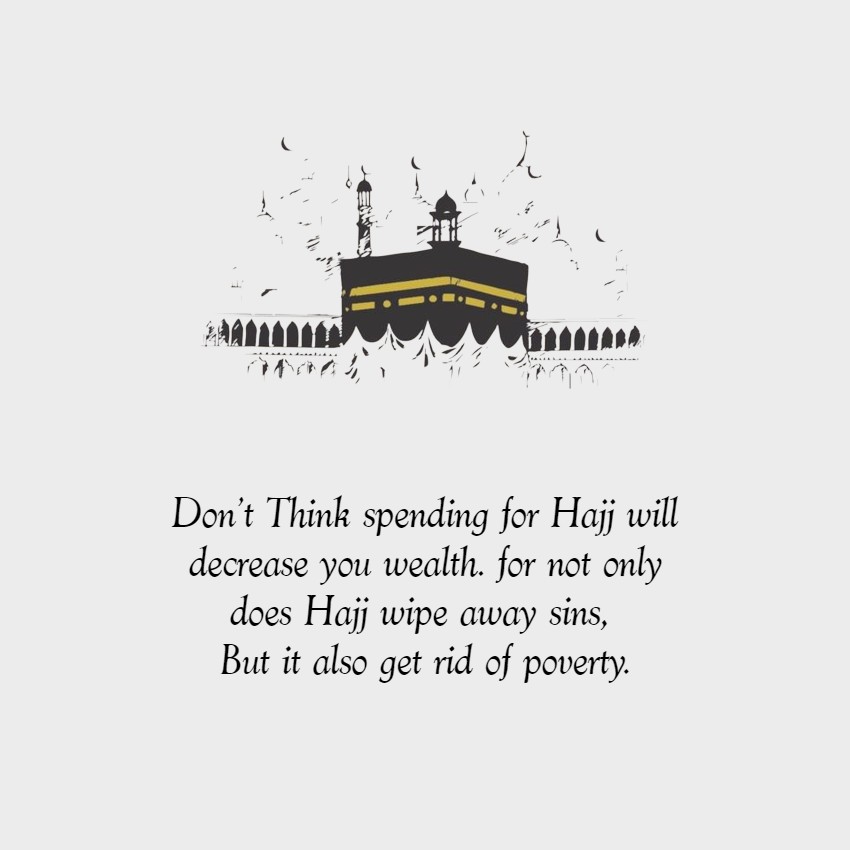 Don’t Think spending for Hajj will decrease you wealth. for not only does Hajj wipe away sins, But it also get rid of poverty. 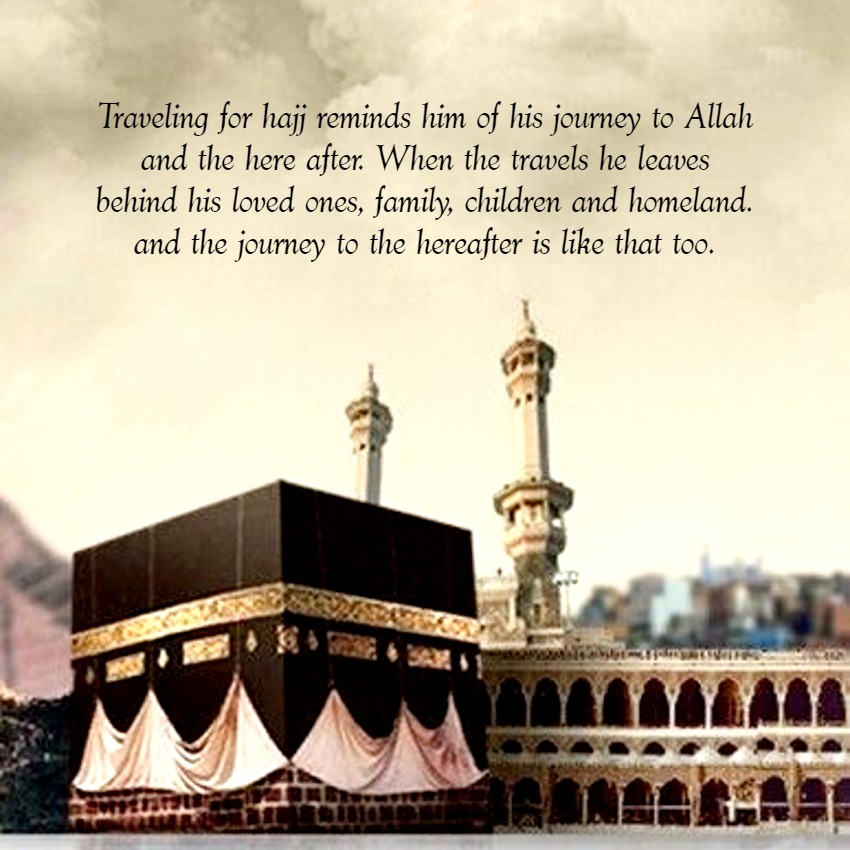 Traveling for hajj reminds him of his journey to Allah and the here after. When the travels he leaves behind his loved ones, family, children and homeland. and the journey to the hereafter is like that too. 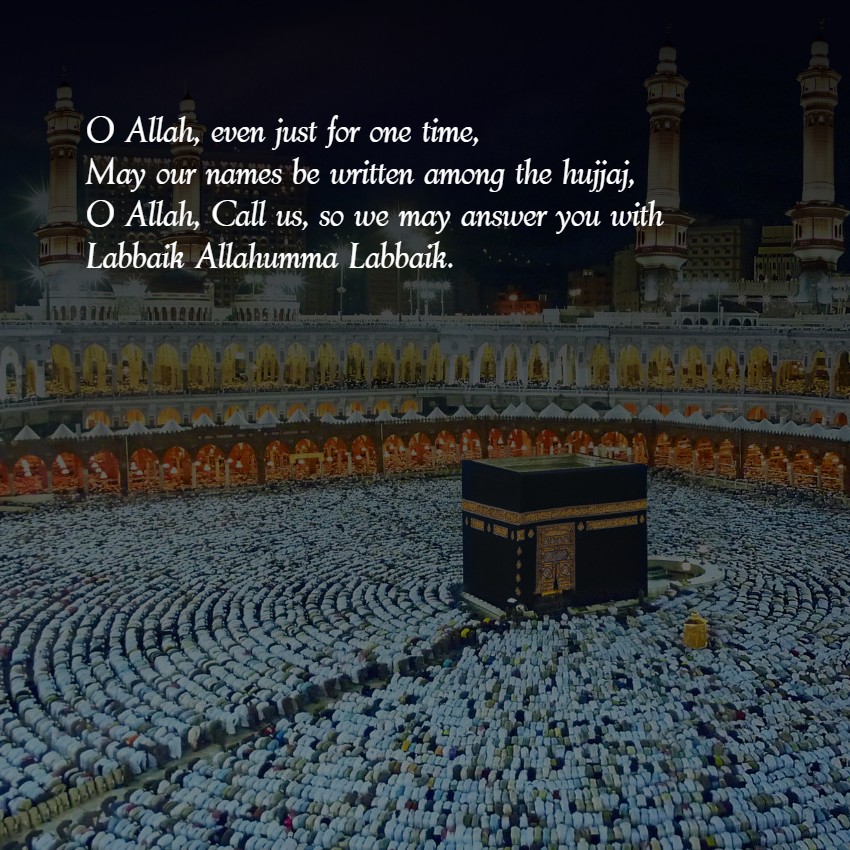 O Allah, even just for one time,
May our names be written among the hujjaj,
O Allah, Call us, so we may answer you with
Labbaik Allahumma Labbaik. 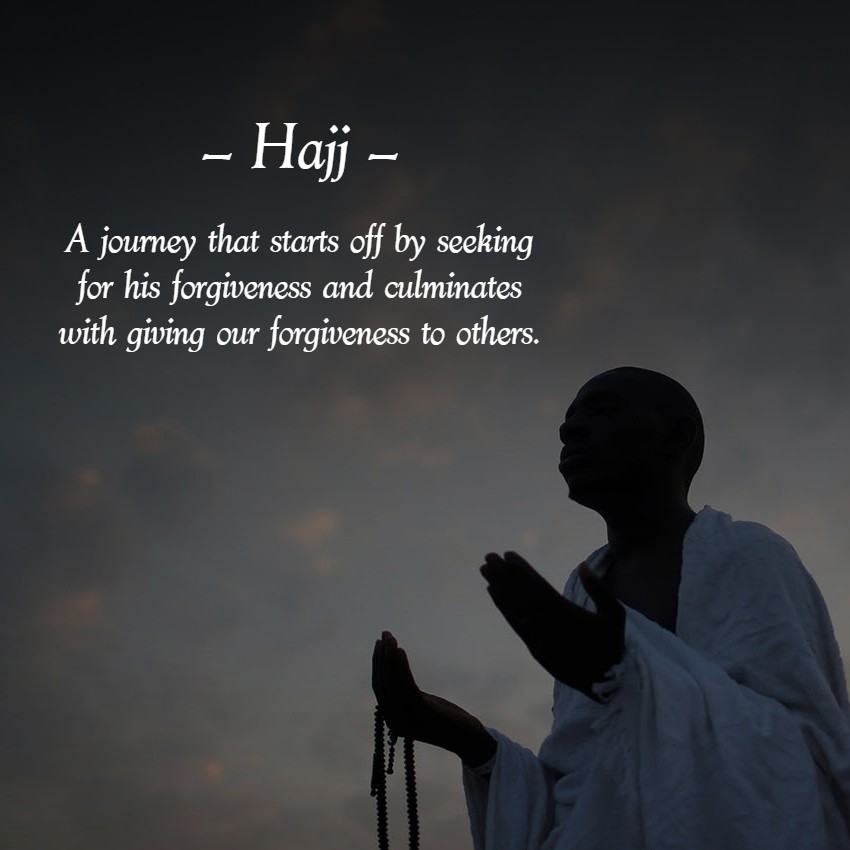 Hajj – A journey that starts off by seeking for his forgiveness and culminates with giving our forgiveness to others.

– “If you are out of your home on the journey to perform of Hajj, then please don’t forget remember Muslim ummah including me. Seek forgiveness from Allah fro whole Muslim ummah in your Duas.” 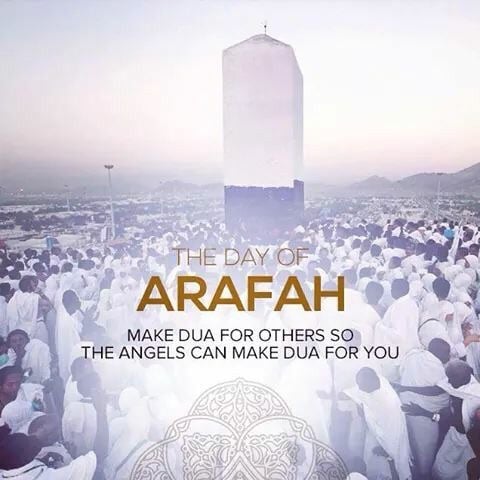 Day of Arafah – Make dua for others so the angels can make dua for you!

Hajj : Its Virtues and Benefits

Effects And Purposes Of Hajj 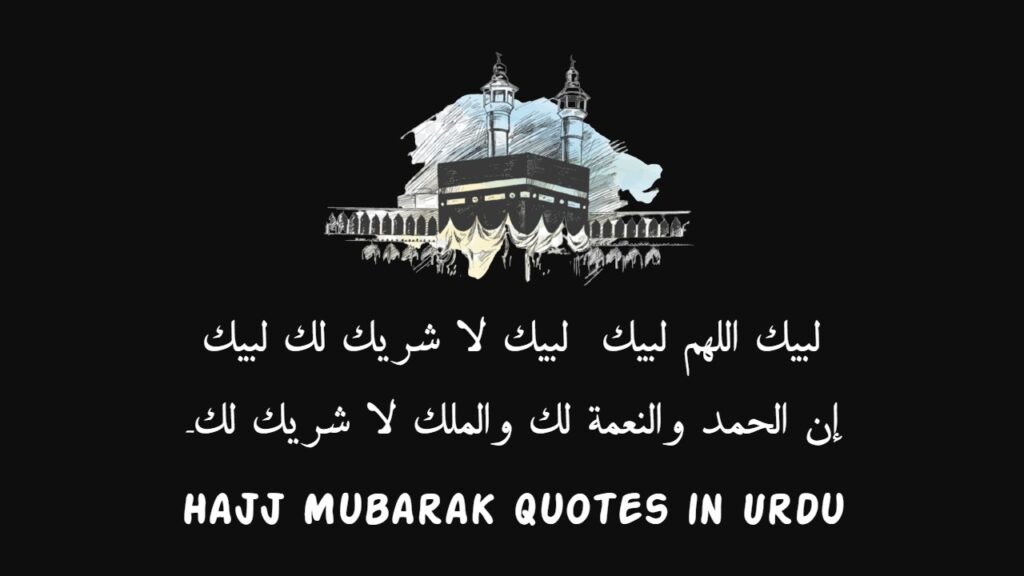